Yael Frank’s work deals with the connection between joy and authority. Her projects are made with humorous, analog means. They examine a fictional anthropomorphistic presence of political speech, proposedly embedded in objects of local cultural insignificance. Frank appropriates the performative potential of local esoteric readymades, to push forward a new kind of participatory relationship. On the spectrum between animating the Israeli National Anthem to creating a bad luck machine, she generates broken jokes; textual images that have a strong humorous appearance, and are conceptually manipulated to the point they become viscerally not funny. With no punchline they turn from a singular remark to an ongoing accumulating phenomenon of poetic and political unease.

Yael Frank (1982, lives and works in Tel Aviv), earned her BFA from The Cooper Union School of Art in NY, and her MFA from the Bezalel Academy of Art and Design. Her work is exhibited in internationally, among else at The Tel Aviv Museum of Art, The Israeli Centre for Digital Arts, The Petach Tikvah Museum of Art, FuturDome Milano, Brno House of Art, Czech Republic, Zachęta National Gallery Warsaw, The Wroclaw Museum of Contemporary Art in Poland, and Hezi Cohen Gallery in Tel Aviv. Frank is the recipient of the 2017 Ingeborg Bachmann Prize Established by Anslem Kiefer. 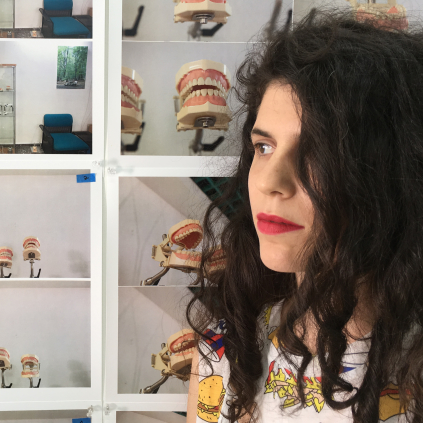 At the core of the installation, a speech by three jaw oracles describes the politics and poetics of “the problem”. Influenced by the theatre of Bertolt Brecht, Samuel Beckett, and The Muppet Show, their speech moves between depictions of a banal catastrophe to descriptions of tacky emotions. This video is viewed through The Last Hour of Cabinet I – a funeral scene of sad Ikea Detolf cabinets. Upon entering the gallery, a delicate architectural and sound intervention turns a hallway into a surreal viewing area surrounded with elevator music, where ghosts are stuck in an endless waiting-room loop. 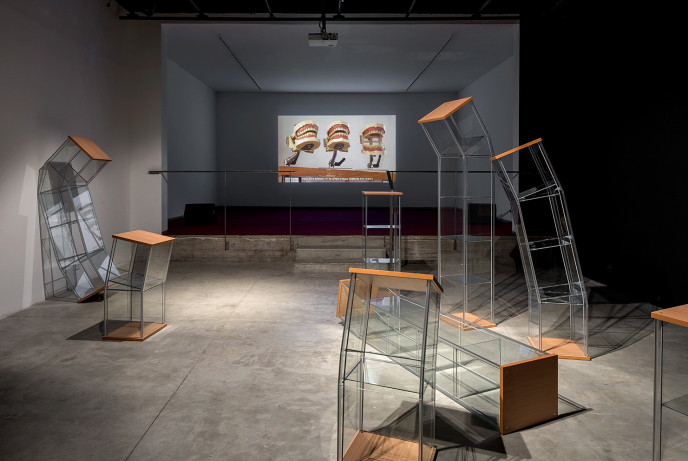 From the exhibition ‘A Problem’, Tel-Aviv Artists’ Studios 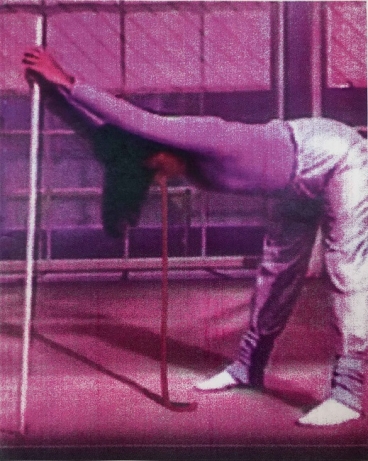 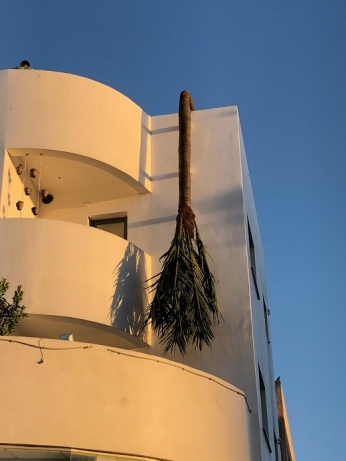 A palm tree is the perfect, nearly hackneyed fantasy—from a coconut on a desert island to a poster in a teenage girl’s room, from artificial palm-shaped islands in Dubai to palms planted on traffic islands throughout Israel, extending across the Tel Aviv promenade, providing an imaginary, tropical touch to the Mediterranean shores. A tree with little shade, whose lifespan is around eighty years, like a human life, it stands upright until it no longer can, or until the palm weevil, a mysterious aphid, eats it from within, leaving our public space battered and strewn with the corpses of trees. A tree stands outside the window of Yael Frank’s grandfather, an engineer by profession, who was never able to explain to his granddaughter how the thin trunk holds the entire weight at its crown. The circumstances of life made it stand, and those same circumstances also made it fall. The artificial palm repeatedly falling from the Artport roof continues Frank’s engagement with esoteric readymades, focusing on the absurdity of what we take for granted, and delving deeper into the symbolism of the palm tree, and its ongoing rupture. It is both funny and painful. Like a kid tickled so much that he appears to be laughing, while in fact he is crying, the palm on the Artport roof feels the burning tickle-pain in its lower abdomen, ultimately making it bend and collapse. Frank sees the pain of objects—the humility of the tree collapsing under the burden and the fantasies which will remain unfulfilled; the suffering of the Pilates ball crushed under the gymnast’s legs; the dwindling tonus of supporting columns; the urge felt by IKEA cabinets to release their bones and extract their necks. She sees the pain, and pushes it a little further, until it becomes amusing, and then a little more, until it stops being funny.