In Israel, the term “infiltrators” is used to describe the transgression of the country’s political borders in order to commit a terrorist act, while the more general meaning of this term describes the hostile crossing of enemy lines or the covert transgression of a given territory’s borders for the purpose of espionage, a political coup, or a gradual conquest. At present, this term is commonly used to refer to Africans who have crossed the border from Africa into Israel; alongside additional terms such as “refugees,” “asylum seekers,” and “immigrant workers,” it plays an important role in the discussion of the status and future of these groups. In this context, the term “infiltrators” fixes the status of border crossers as that of liminal subjects, who remain trapped between here and there, citizens of a no place.

The exhibition “The Infiltrators” examines the local and global state of asylum seekers and refugees through works created with the participation of communities of asylum seekers in Israel and elsewhere in the world. But the exhibition title plays a double role, since it aspires to look at the included art projects as constituting an act of infiltration. The featured artists attempt to undermine existing stereotypes by enacting different forms of participation, thus questioning common perceptions of the complex state of asylum seekers or refugees. These artists infiltrate the communal or public sphere as outlaws or cunning spies, and cross the thin line between reality and fiction in order to examine and destabilize the power relations that control and define this sphere. They search for the fissures within dichotomies, for the liminal spaces between points of contention, and linger within these borderline spheres.

The featured projects reflect a range of participatory strategies that do not shy away from provoking conflict and walking the thin line between the ethic and the aesthetic. By means of these four works, as well as through talks and guided tour with the different participants- Asylum seekers, south Tel- Aviv residents, artists and activists, “The Infiltrators” attempts to examine participatory art’s forms of representation and display as well as its limitations, while probing the relations between artist, community, and audience.

Ghana ThinkTank (Christopher Robbins, John Ewing, and Maria del Carmen Montoya from the US), was established in 2006 as an international network of think tanks producing strategies for the solution of local problems in the “developed” world.

The founding principle was that think tanks in the so-called “third world” could offer solutions to “first-world” problems, as a way to expose the assumptions and power dynamics of cross- cultural work, particularly charity, aid and international development. They later discovered that this process could serve to create encounters between groups in conflict, and to produce unexpected alliances.

For “the Infiltrators”, think tanks composed of asylum seekers from Eritrea and Sudan offered solutions to the problems of Israelis from the south of Tel Aviv, and vice versa. The process evolved over the course of several months, and included conversations with dozens of residents and asylum seekers who raised problems ranging from dirty dog parks to racism. The installation at the Artport Gallery attempts to follow the processes undertaken by means of documentation, sculptural representations, and a series of workshops that will mobilize people out of the gallery and into the public sphere of south Tel Aviv, and vice versa. A mobile sculpture positioned on a tricycle functions as a point of encounter and a work station that continues to record problems and broadcast solutions in the gallery and throughout the city in the course of the exhibition. Perhaps also after it ends…

The project was created in collaboration with Maayan Sheleff

The Neve Shaanan tour is in collaboration with Nisan Almog 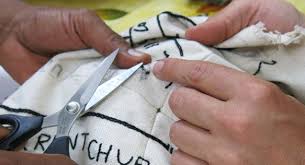 The artistic duo Documentary Embroidery, whose members are Aviv Kruglanski (Spain/Israel) and Vahida Ramujic (Serbia), employ embroidery as a documentary medium unfolding in real time. They spend long periods of time in different places, where they speak with inhabitants and passersby. In each case, they create an embroidery work based on people’s stories and responses, alongside their own interpretations as artists. At times they ask the participants to draw or write about elements that they would like to add to the gradually embroidered patchwork. Their project for “The Infiltrators” involved spending a month doing embroidery work around Levinsky Garden – a site that has acquired symbolic value for African asylum seekers.

Embroidering in the public sphere as a routine that evolves over time produces a heterotopic sphere where social dynamics may be observed, and where everyday reality is amplified and rendered more extreme through the focus on small details. Just as a photographer impacts the reality he documents, so the presence of these artists in a given sphere does not constitute a detached anthropological gaze, but rather a presence that calls for participation and interference, and which subtly infiltrates into the human relations in that sphere.

The film follows the project “Please Love Austria”, created by Paul Poet’s collaborator, the late artist and theater director Christoph Schlingensief. For this project, Schlingensief set down a container temporarily inhabited by 12 asylum seekers from different countries in the square outside Vienna’s opera house. The container stood there for an entire week, and the audience was asked to vote daily in order to decide which of the asylum seekers would be deported from Austria.

The work and the film documenting it cynically reflect the image of fascism in the 21st century as interactive, amusing, and sensational – while exposing the dark, terrifying dimension lying beneath its attractive packaging. Schlingensief and Poet described the project as a kind of artistic terrorism, which infiltrates reality in order to present it with its own reflection. 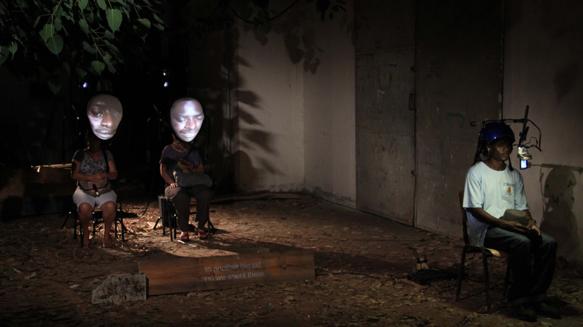 Landau worked with asylum seekers from Darfur in the south of Tel Aviv, as part of a long-term project with immigrants and refugees in different places worldwide, and collected their stories and testimonies. This long-term project, “Resident Alien,” examines the limits and limitations of documentary and performative actions in the context of testimony. Landau makes use of documentary conventions, while undermining them through its means of display. The connection that is forged between the one giving the testimony and the one listening to it challenges conventions of distance between viewer and artwork. The work reflects the experience of geographic and cultural uprooting and its implications for perceptions of language, body, and place.