Angel Borrego Cubero won among others, the international ideas competition for the design of the Civil Registry on Campus of Justice in Madrid (2007), and was awarded 2nd prize at  the national competition of ideas for social housing in the Block 5 Zaragoza (2007), the national competition for Public Art Projects Lakua Vitoria-2 (1999) and the contest of ideas for reforming the roof of the Museum El Prado (1995). He has been a finalist twice at the Europan (2003, 2005) and has been invited to participate at restringed tenders for social housing.

He designed exhibition spaces such as FeedForward at LABoral Gijón, the exhibition Filipiniana at the Centro Cultural Conde Duque and the exhibition Arte e Imagen en Movimiento at the National Museum Reina Sofia. He is the author of site specific installations that work also as resting spaces for the Art Fair ARCO 03 and ARCO 04 and constructed houses such as the House Space Invader or House Murakami.

While trained as an architect, Angel Borrego Cubero has been building a career focused on interdisciplinary topics such as contemporary urban condition, the relationship between private and public space, violence, surveillance, architectural fictions etc. Mainly making use of site specific, new media and video installations, his works have been exhibited in internationally acclaimed venues such as the ARCO Madrid Art Fair, the Museum of Modern Art Reina Sofia, El Matadero de Madrid, the LABoral in Gijon, the Artium in Vitoria, at galleries and events in Spain, Germany, Belgium, UK, USA, Argentina etc. Borrego Cubero is also the director and producer of the documentary film `The Competition´ ended in 2013, selected to open the 2013 Architecture Film Festival Rotterdam (AFFR). His art works are represented by the gallery Heinrich Ehrhardt. 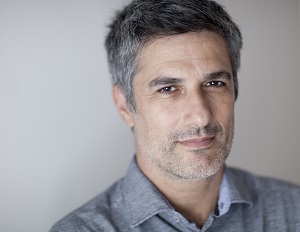 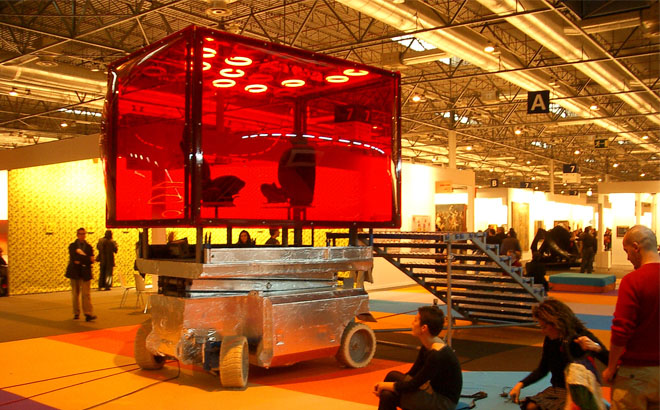 AAAEE (Art As An Elevating Experience)

The AAAEE (Art As An Elevating Experience) second version was developed with a similar concept to the one we had designed for the 2004 edition of the Art Fair ARCO Madrid.
It was another opportunity to convert the art fair into an artwork, trough appropriating a general view of the fair.
The visitors were elevated over the ground level of the fair’s trade.
Art is converted into AAAEE, in a literal way, physically, into an elevating experience. This is also a fairground and a journey.
The piece turns the fair’s space into a “Playtime” with a Mars orange tone, into a colorful landscape that contrasts with the extreme clarity of the object’s perception and the people inside.