Seminal Narratives from the Middle East and the Indian Subcontinent

The exhibition Vanishing Point examines modes of constructing national narratives, while addressing questions of collective experiences and memories and the ways these are formed. Through the examination of different methods the artists turn their gaze inwards – exposing, examining, and playing with the production mechanisms which nations uses to establish and distinguish their identity, culture, and heroes.

The exhibition’s starting point is a series of concurrent events that took place in the Middle East and in the Indian subcontinent in 1947-1948, which unfolded around the end of the British rule in these areas. Through the works of Israeli, Palestinian, Indian, and Pakistani artists, the exhibition explores these parallel timelines that originate in the early 20th century, and wishes to reflect on the possibilities entailed in the encounter between them from a contemporary perspective. Derived from the world of painting, the title of the exhibition alludes to the view that this artistic point of convergence has the power to create a perspective, or indeed – a perception of depth.

The artists in the exhibition explore and employ diverse cultural means used to shape history and a distinct national identity. The exhibition features Amir Yatziv’s video, Man With Two Beards, which is based on illustrations in Israeli and Palestinian textbooks; the works of Farid Abu Shakra, in which he engages with Israeli stamps and the various national symbols they present; Noa Gur’s work, which takes place in the Israeli Wing of the Tel Aviv Museum of Art, in front of one of the canonical symbols of Israeli art (the painting Resting at Noon by Nahum Gutman); Imran Channa’s piece, in which he examines the codes surrounding the clothes and appearance of the first governor-general and founding father of Pakistan, Muhammad Ali Jinnah.

The exhibition Vanishing Point is a joint project of Artport and the Art Gallery at Beit HaGefen – Arab-Jewish Culture Center in Haifa. The first installment was held in December 2015-February 2016.

The title of Farid Abu Shakra’s series Dead Letter Office refers to a special wing in the postal service, where all undeliverable letters and parcels end up.
Abu Shakra collects stamps that were issued by the Israeli Post in the last couple of decades, featuring different images: animals in Israel, flora in Israel, holidays, cultural icons and landscapes. He juxtaposes them with stamps from other series, including stockade and tower, tanks and airplanes, thus charging them with new, loaded meaning. He then adds to the paradoxical groupings his own stamps and names: “Joyous Festivals”, “Thistles”, “Good Arab”, and “Dead Letter Office”, which appear in Hebrew, Arabic, and English. Abu Shakra wishes to examine how stamps can serve as a means of formulating, appropriating, representing, and celebrating different aspects in the legacy and culture of the society that issues them. As a Palestinian who resides in Israel, he reflects on the place of the neglected, the marginal, and the forgotten that was left out of them, and which does not necessarily coincide with the values and messages that they represent. 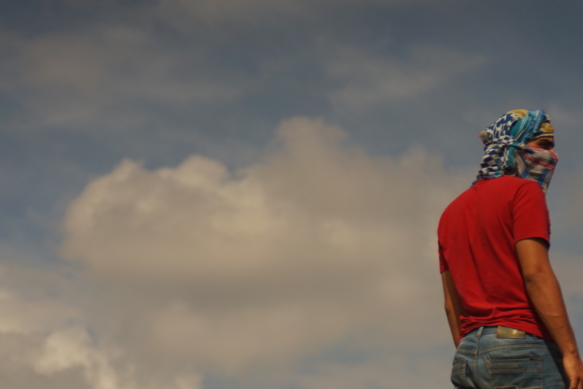 Thalia Hoffman’s video is one in a series of artworks that document human situations on refugee routes throughout the Middle East, without national borders.
At the heart of this video stand a refugee truck and the events that surround
it during the 24 hours in which it is stuck in the Shfela region in south-central
Israel. In these 24 hours, more and more people and objects add and pile up on
the truck – women and men of all ages, who speak Hebrew and Arabic. It is not clear where they are coming from or where they wish to arrive, caught between the past and the future. In the meantime, the wait and the amassing of more and more objects and people in a continuous moment of not-knowing become a state of living in themselves.
The aggregation of people and objects in the film raise questions concerning the relation between the individual and the group, as though offering possible beginnings of narratives that formulate for a brief moment, only to fade back into the total gamut of events. 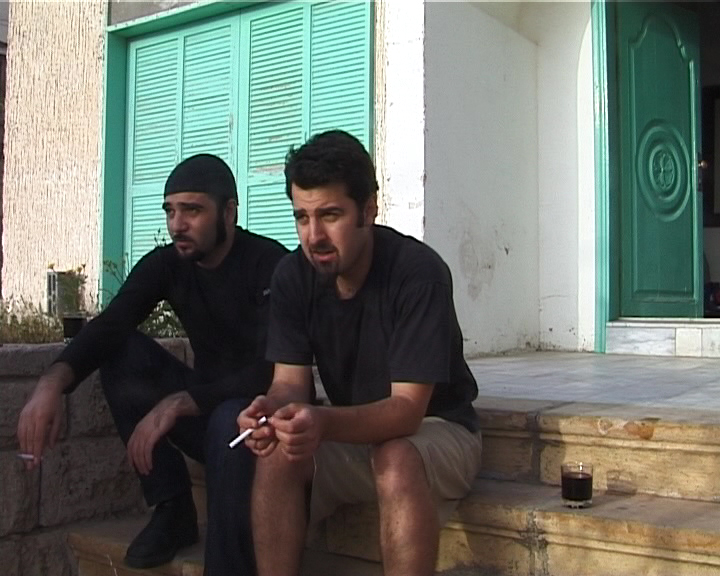 In The Truth, we follow two men in what appears to be a guided tour of Yafo popular tourist attractions. However, rather than presenting the familiar sites, the guides take us to derelict, abandoned, and random location throughout the city, offering historical descriptions that consist of fictional and nonsensical stories. The sites are patently wretched and detached from their environment, however each is accompanied by an elaborate historical explanation, presented with such confidence and detail that it almost deceives the viewer. Thus, for instance, a deserted construction site becomes the future Jewish Temple, while the water tower becomes a religious monument equivalent to the Holy Grail.
Where does the truth lie? What is the meaning of a historical site, which can be infused with disparate meanings that harness it to different political needs? Towards the end of the video, one of the men speaks against a reality in which “an entire society is built on a lie.” In the context of the film/video this criticism is directed against the fictitious story about a society in which children are brought up to think that the water tower is “merely” a water tower. However, it is impossible to overlook the similarities between the fictional situation and the complex reality of the conflict and the relationship it weaves about between truth and lie, politics and imagination. 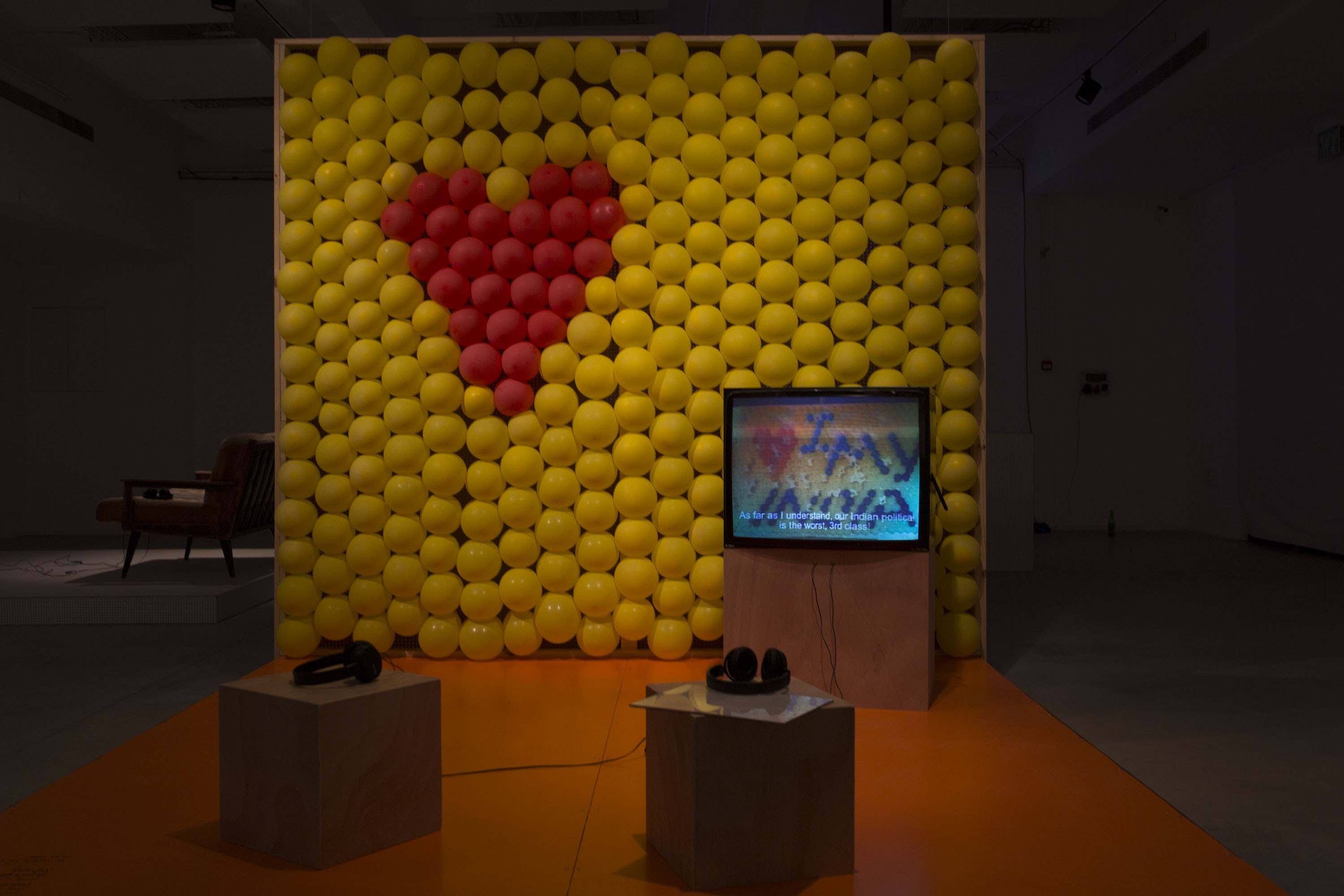 I love my India

Tejal Shah’s “I love my India” takes place in a temporary amusement park, several months after the Gujarat riots, where over one thousand people (mostly of whom Muslim) were killed in clashes between Hindus and Muslims. Shah sets up a wall of balloons in the park, which reads “I Love My India.” She invites passersby to
play a game whose goal is to shoot as many balloons as possible, while asking them a few questions. The first: “What do you think about the current state in India?” is answered in almost complete unison: “India is the largest democracy in the world.” The second question: “What do you know about the events that took place in Gujarat?” stumps most of the participants. Shah wonders where is the line between patriotism and nationalism, and what is the meaning of defining a country as a democracy that offers equal right to all of its citizens, if these equality and tolerance are repeatedly infringed upon by violent events that target minorities. While spinning around in the carousel she concludes: “sometimes not seeing something, is just as political as seeing it.” 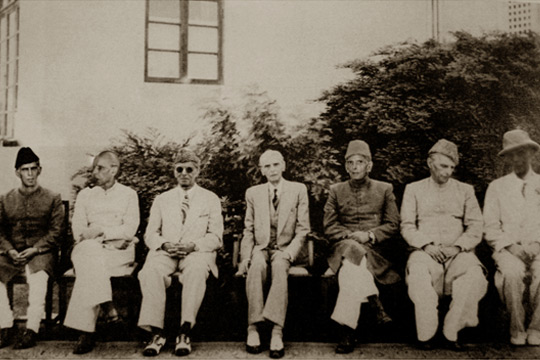 Imran Channa often engages with questions of history and memory in Pakistani society. His work, “Find the Real Jinnah” presents seven different portraits of Muhammad Ali Jinnah, the founder and first Governor-General of Pakistan. Each portrait presents the leader donning different signs of identity (modern western, traditional Muslim, formal, and casual cloths).
Jinnah was and to this day remains an intriguing figure, shrouded in mystery. He was a Muslim, but adopted secular life style in most aspects of his life, lived and studied in England, and even married a Zoroastrian wife. Some believe that his embrace of Muslim culture stems largely from the political position he assumed as president of the Muslim League in India, and his activity for the implementation of the partition and foundation of Pakistan – a state whose national identity, much like Israel, is intrinsically tied with its religious identity. The changes and political turmoil in Pakistan in the last couple of years, bring forth the questions of the cultural and political legacy of the father of the nation, what of this legacy has survived and what aspects of this history are undergoing adaptation to the changing nature of the country? 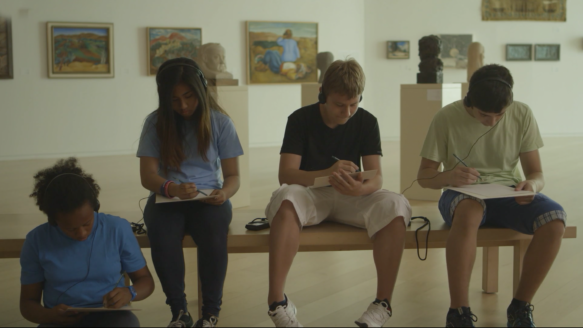 In the video “Collective Identity”, the artist Noa Gur visits the Tel Aviv Museum of Art with a group of children from the South Tel Aviv School Bialik Rogozin.
The children sit with their backs to Nahum Gutman’s painting Resting at Noon, and are asked to paint it based on the museum’s audio guide for children – Kooli. The viewers of the video can also hear the audio guide to which the children are listening, in which two actors, who dub the painted figures of the workers, describe the scene in an affected and pronounced Arab accent. The children, whose parents have immigrated to Israel from Africa, South America, East Asia, and the former Soviet Union, and are themselves coping with the experience of foreignness and difference on a daily basis, are asked to address another other– the Palestinian. What does the stereotypical image of the foreign look like to those considered foreigners themselves? And what is the meaning of the loaded encounter with it in one of the hallowed halls of Israeli art? 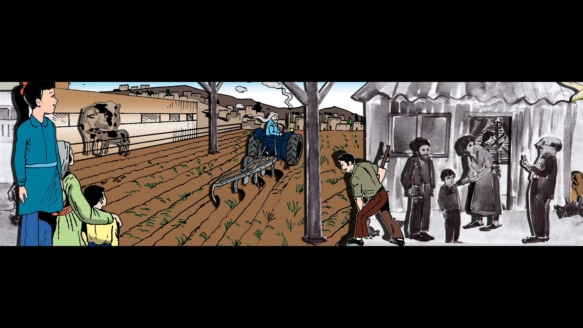 A Man with Two Beards

“A Man with Two Beards” focuses on the visual images used to teach Israeli and Palestinian children about the history of their people. The illustrations featured in it were taken from two history textbooks – one Israeli and the other Palestinian – that were published in recent years. Yatziv extracted the illustrations from the books and their original context, and invited a group of three Israeli children and three Palestinian children to look at them and compose a new story. They titled the story that they created, “A Man with Two Beards,” after one of the main characters. Many aspects of the original illustrations have found their way into the new story, among them farming, the Separation Wall, and portrayals of exile and wandering. At the same time, the story also contains many elements derived from the children’s naïve and hopeful world. Paradoxically, in the children’s story there are just a few people,
and the only family that appears in it wishes for the arrival of neighbors and for an encounter with the other.