Artport’s year-end show will occur in arbitrary moments in time. Moments before the residents program is over, however, not necessarily when their projects have been completed. For most of the artists’ in Artport third year… One year is not a long time to create projects. Since many of the projects only began in Artport this year, they will only continue to bloom. Nonfinito is not quite a year end show, it is more of an opportunity to familiarize ourselves with the artist’s process of creation before the projects are completely done, but while they are already prepared to be exposed to the public eye.
The boulevard of transparent studios in Artport is misleading. It allows you to believe that you can peep into a certain secret sector of the art world- and many of our visitors often ask to look inside. In a time of increasing popularity of studio visits and artist talks, the impression is that you can uncover the art making process by just moving a curtain and opening a door. Actually, Artport is a work space which chooses 6 artists annually to work on their individual projects. While at the site, most of the time people are; answering emails, speaking on the phone, editing movies, noting ideas, and mixing colors.

Can you even truly peep into this creative process? Can you put it in writing? In photos? In only a short visit?

Guy Goldstein has been busy in the last few years translating colors to sound and back. His ambitious projects include; numerous attempts, paintings, and prints- however, he only considers a few of them as completed works that will find their way into a gallery space. How does one decide when work is done? When is the translation only a draft and when is it a work of art? Looking into some of the papers he has left behind in his meticulous sorting process will raise questions about the differing eyes of the artist, curator, and audience.

Hinda Weiss accumulates video material in the real world and transforms the footage into ongoing surreal scenes. She collects material from the here and now, and in her studio she manipulates the footage by deconstructing it and reassembling it to blur the lines between the tenses. Through this action she tries to decipher how the past, present, and future can all exist at once.

Natalia Zourbaova was constantly painting throughout the year. In the last two months of the year she got stuck at Artport’s shared kitchen and began repeating the process of documenting the weekly cooking routine. In the exhibition, Natalia will expose the long process that leads to her final pictures. She will display the numerous repeated attempts of drawings, some done later when looking with fresh eyes and returning to the same spot in place and time.

Tzion Abraham Hazan dedicated this year to creating two movies that will only be released in 2016. In the exhibition, Tzion will present a video installation that will reveal the methods that he is using for his film. Tzion addresses the manner in which the angle chosen to shoot a video establishes a certain body image and the connection of that image to a tangible experience.

Ron Amir is a long-term photographer, his last project took him 12 years. His photos taken in Cholot detention center uncover the reality of temporariness and transition. These photos are only the beginning of the relationship Ron has built with people who yearn for him more than anything.

Public Movement will operate Debriefing 2- a one on one with an agent of public movement during which a complex array of connections and conversations that were a part of the groups research about modern art done in Palestine prior to 1948 is being displayed. Debriefing is using their moment of passage or transformation between research and action. By transforming the debriefed audience to agents of information. The action of debriefing while the work is still being finalized is a sort of rehearsal to examine and to shape the action and thus the participants and their reaction has an impact on the final structure of the action. 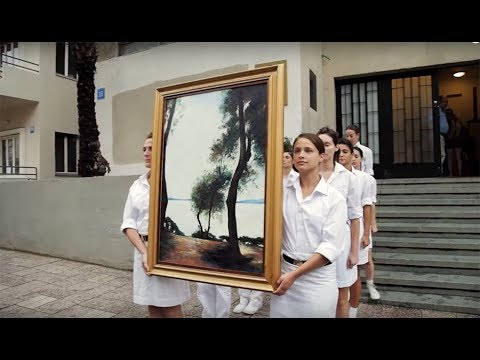 “In his diary, Dizengoff wrote that three public spaces defined European cities— the boulevard, the square, and the museum.By building each of these, Tel Aviv carefully modeled itself after a European ideal”.(The Agent draws a direct line from 1948 to museum, and writes israel over the line.)Debriefing Session II is based on a series of one-on-one exchanges about the performative relationship between the state and its culturalinstitutions. During the performance, which takes the format of a private meeting, the Agent recounts their research about modern art made in Palestine before 1948.Public Movement presents the debriefing format as a methodology for the transmission of information, turning research into action. At the root of the debriefing is the possibility that to activate art in the political field, anagent may be a double agent. 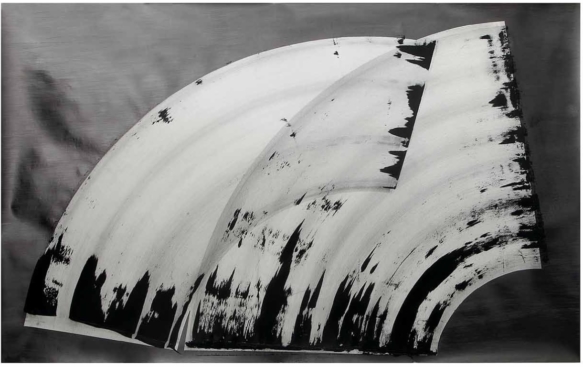 Guy Goldstein creates analog mechanisms,an assembly line, a system that endeavors totranslate sound into color and back again, a circuit that generates information and at the same time brings about its erosion and deletion. His points of departure are physicaltheories that divide sound into six types of noises, each named after a different color in the visible spectrum, each has a different function and represents a different type of information.The long work process on his drawings and paintings starts with an intensive research and continues with conversions, digitizations, software, mechanical and analog devices, and various experiments. He deconstructs and assembles, creates information and repeatsit in different ways, translating, converting,and duplicating it time and time again. This repetitiveness causes the translation to losesome of its precision and become blurry as aresult of its own production process.Guy Goldstein’s mechanisms for creatingthe drawings are part of the process: clockswhose hands are turned into brushes, drillsthat create fixed patterns on the surface, countless rollers and brushes, duct tape, gluing and duplicating. Nothing gets lost, all are exhausted in full – duct tape is used for a recurring copying, leftover paint is completelysqueezed from the roller brush, until something like a long film of a silent movie is formed, one whose sound we are expected to complete by ourselves. Goldstein’s work strives to find the underlying principles thatelude the eye and the ear, invent ways to dealwith the noise, with the dirt, and find an opening through which to read what at first appears to be incomprehensible. 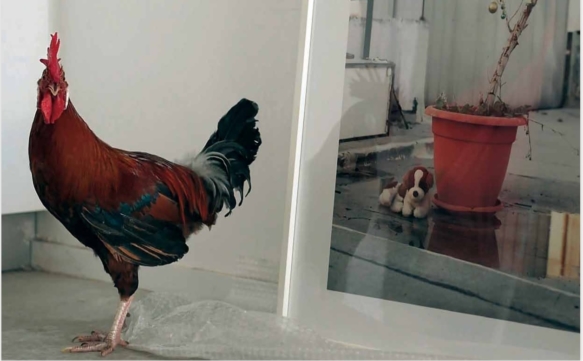 During the last decade, Tel Aviv has been covered with scaffoldings. At any given moment, on every turn: digging a hole, building a high-rise, expanding a street, adding another floor. More and more parts of the city are covered with plastic sheetsthat conceal buildings in different stages of renovation, simulating a huge screen that atany second may rise to unveil the renewedcity that hides underneath it. However the constant change turns out to be nothing but hysterical movement, the wave of renovations is nothing but a wave of dust. It seems that the only stable thing is constant change.Hinda Weiss collects her materials aroundTel Aviv – from the streets she walks on to the rooster that lives in the Artport complex, from the nostalgic beach to a bear suspended on a crane that floats over the city. Her video work looks at a place which is simultaneously romantic and fantastic, appealing and revolting. She creates an experience that loopstime, stuck between the mundane experienceand an ideal image of a place.

Ron Amir’s arena of photography is locatedat the heart of the desert, in the vicinity of the Holot compound, where over two thousand asylum seekers from Sudan andEritrea were placed over the last couple of years. Purportedly, it is an “open-door” facility whose residents are free to leave.But it is a routine of waiting. The time in thefacility is divided into a different kind ofunits. The day is not necessarily divided intohours; it is divided into periods between signins.The days begin after breakfast and end with the 10PM sign-in. The weeks, months, and years are compressed and stretched with the time that passes between deportations,departures, Supreme Court decisions, andprotests. The asylum seekers come up withvarious makeshift solutions to pass the time.During the day, particularly in the evenings, the areas near the facility become a bustling arena, sun shades and sitting areas are setup, field kitchens, food stalls, and transientcafés are spread out in the heart of the desert.At 10PM, just before the daily sign-in, the temporary city vanishes – the blankets are folded, the mats rolled, the utensils packed, the packs of cards and leftover food are hung from the tree branches. In a couple of hours, the small kits will be spread out once again– benches will be arranged, water jugs filled,bonfires lit, and thousands of people will carry on with the routine of waiting.Looking at improvisation mechanisms and transient structures, Amir continues his research into the manners in whichmarginalized communities respond to restrictions imposed on them by the system, and the ways they successfully undermine it,even when conditions are hard and the meansare meager. 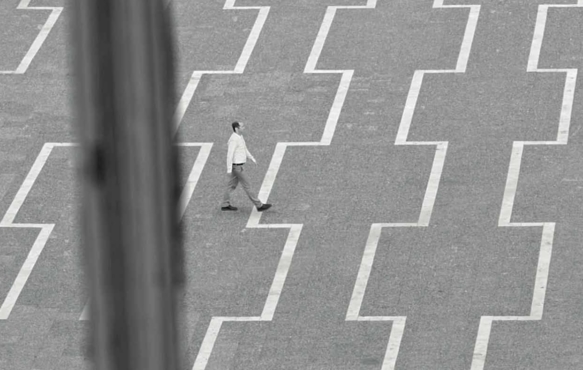 Tzion Abraham Hazan’s video installations explore the impact that moving images have on the physical world. Hazan’s work process involves prolonged gazing at video materials. As he repeatedly watches his videos, Hazan echoes the subjects depicted, generating idiosyncratic, physical empathy towards the subjects of his work rather than looking atthem as distant phenomena.During these periods of contemplation, Hazan puts himself in physical postures which resonate with those of the depictedbodies, experiencing their image physically and internally. The manner in which the video is then edited stems from this sense of connection, and the internal sensoryexperience manifests as an installation piece. 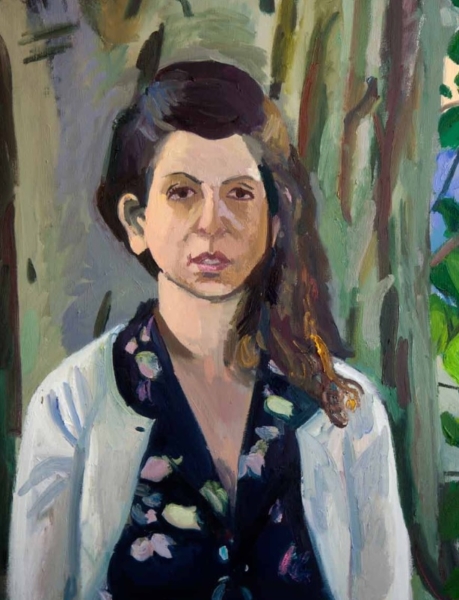 During the last year Natalia Zourabova has been constantly painting, drawing and sketching. She decided to return to painting only from observation (en plain air) and she hasn’t stopped observing. She makes quick sketches wherever she finds herself; whiletravelling, and even in Artport’s kitchen. Alongside this more spontaneous work, shecontinues to create large scale oil paintings which she works on for several months.Natalia creates a relationship with thesurrounding world through the act of painting. In her work she revisits the samesubjects and places again and again. Every time returns the scene has already changed. It is an accumulative action, where impressions and sketches are building, next to and on top of one another. Natalia understands paintingas “open source code” – a journey one takes among the sketches and the paintings, which raise doubts and questions, small victories and losses. The process she dictates is a live one, and the drawings and paintings that live in it become stations on the road, not afinal destination.