Motions for the Agenda

All About Law and Justice - Exhibition and Series of Events

The exhibition Motions for the Agenda activates existing and imagined reciprocal relations between art and law. As such, it cultivates a space in which a courageous and unexpected exchange between the two fields can be manifested. This exhibition originates from a series of meetings between jurists, curators, artists and cultural theorists that has been held for the past two years at Artport under the title Towards Legal Imagination.

The premise of these meetings, as well as the exhibition’s, is that the law dictates and affects every aspect of life while remaining imperceivable, elusive and altogether unfathomable. The power of the law is derived from its all-embracing ubiquity, thus making it difficult to penetrate, resist, reshape and see through the law, let alone see beyond it. Based on these complexities, the exhibition is a proposal to explore and to fashion modes of consciousness, thought, action and political-artistic-legal intervention that thrive at the seam between legal and artistic imagination.

Motions for the Agenda is rooted in this area between law and justice, between the impossibility of interpreting justice and the duty to deconstruct, interpret and reconstruct the law. Deconstruction and art converge at this point in the demand to scrutinize and touch the mystical foundation, the legitimate fiction, that underpin the law. Akin to the man from the country, whose character embodies order and tactics, determination and scheming, quiet intervention and long-term tactics — this exhibition looks at the violent and unjustifiable foundation of the law and at the legitimization of the law and the legal system. In this place, which is before the law, with the law, but also outside it, this exhibition aspires to join hands and walk side by side with the man from the country. It proposes itself as a platform and a roadmap for proposals through which art interprets, critiques, and engages the law from within, alongside it, and possibly even beyond it.

This exhibition and the series of meetings that preceded it aspire to found an environment that brings together art and law to advance critical, creative thinking and action that ask not to harm and destroy, but to animate, imagine, transform and broaden the concepts of law, the judiciary and justice. 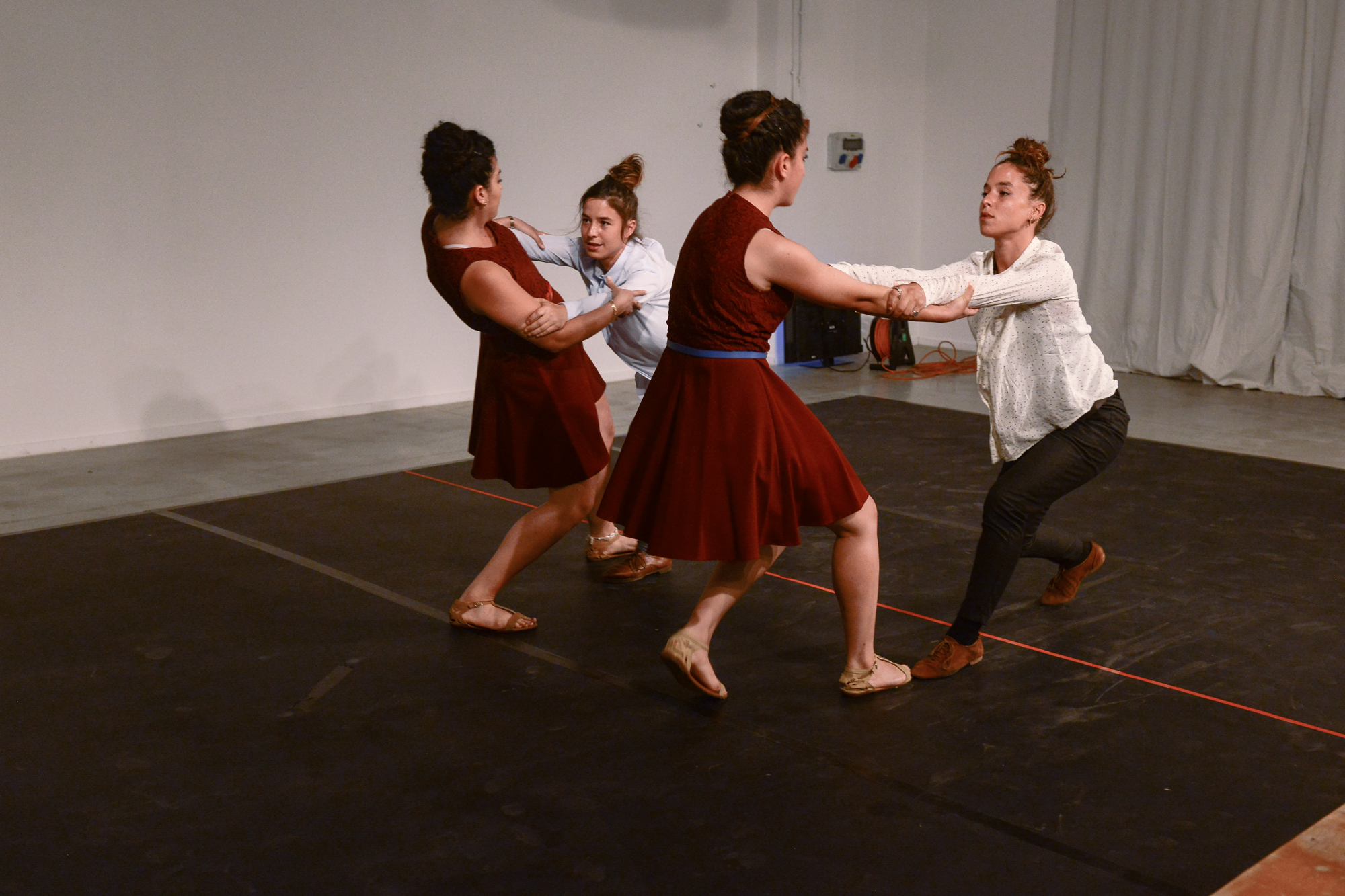 To what extent does language shape our perception of reality and our emotional experiences? The artist, Einat Amir, and the psycholinguist, Dr. Orly Idan, invite the general public to examine this question in relation to the issue of refugees in Israel. ‘Pragmatic Failure’ acts simultaneously as a participatory performance designed for an art space, as well as a psychological experiment run by the PICR Laboratory of The Interdisciplinary Center (IDC) Herzliya. The performance leads participants through unique spaces, while filling out electronic questionnaires, interacting intimately with actors and receiving real-time experiment results. This project is the first in a series of collaborations between Amir and the Laboratory which runs by Prof. Eran Halperin, Prof. Tamar Saguy and Dr. Michal Reifen Tagar.
Register here 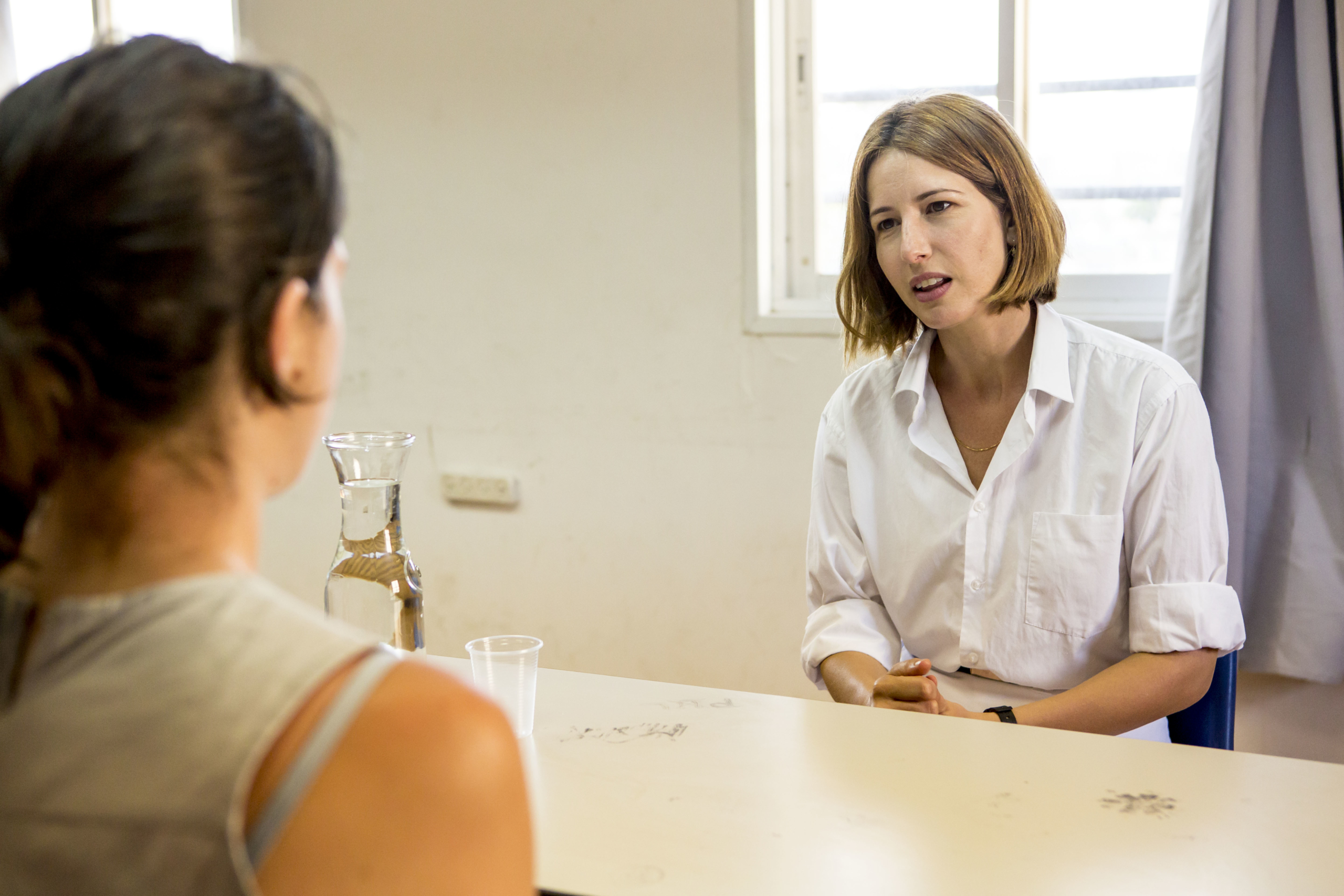 Each session is limited to 20 participants

Public Movement goes back to the very first time the military speaks with us, about us: the “personal conversation” in the first summons of the draft process. The military performs itself in many ways and in this case it is embodied in the figure of a young female soldier.

Public Movement recruited a new cell of women who served in the IDF as interviewers, and together they reactivate the “personal conversation” as a performative model. The art of interviewing was developed in 1955 as the major tool through which the military studies the emotional landscape of each potential soldier. The intimate conversation is translated into data that the system can use. In the past sixty years, a growing military archive has been collecting the psychological profiles of every Israeli male citizen, a state-owned emotional deposition.

The Interview is the first time in which Public Movement stages this military model in a civic environment and thus invites the public to practice the artistic event as an arena of knowledge exchange.
Register here. 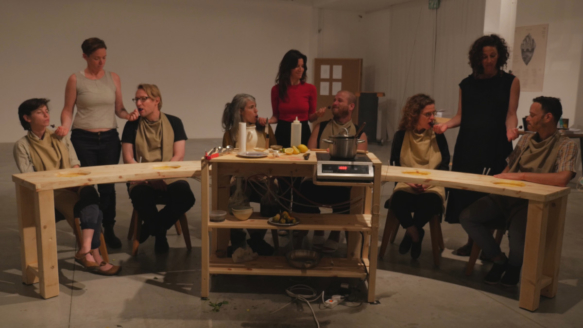 To Serve You (work in progress)

The work seeks to explore the connection between food, rules, law, nationality and security. During the months preceding the exhibition, Hoffman held several dinners with jurists, culture scholars, sociologists, and psychologists.

The sound object installed in the exhibition enables the general public to listen to a documentation of their encounters and conversations, ranging from the personal to the analytical, and inspires reflection on the place that food and sustenance inhabit in our construction of identity, and on the political arena that imbues food with meaning. During the exhibition, the object/sound table is also used in an intimate performance in the form of ‘nourishing meals’, during which the balance of power between nourisher and nourished, between host and guest, and between diners will be examined.
Register at: thalia.hoffman@gmail.com

Video on view during the exhibition

Through colors, rhythms and sounds, the video work portrays the supreme court’s decision regarding three people requesting not to be sent to Holot Detention Center.

The work is based on the assumptions that language is immanently exposed to interpretation and explanation, that language is power, and that the languages of law and art are widely depicted as the territory of experts.

Truths embedded within a given language are explored in the video in-relation to the rights of asylum seekers and immigrants in Israel. The gap between fact and theory, between experts and laymen, is revealed through the examination of the differing use of words by the court in-relation to legal academic research.

Kafka for Kids (work in progress)

In the framework of the exhibition, Roee Rosen will film, for the first time, a new monologue called ”Explaining the Law to Kwame”, which deals with childhood and the legal status of minors under Israeli occupation, and during which the speaker coasts into matters related to aging and sexuality. The monologue is performed by the actress Hani Furstenberg alongside a panel of literary and legal experts that is open to the general public; both of which will become part of a new film by Rosen. In this way, the exhibition serves as a set for the shooting of a future film, a musical that combines documentary with fiction, centered around a television program that teaches Kafka stories to kids. The monologue and the panel, moving between reality and fabrication, between jurist and actor, between the body’s softness and stiffness, reveal unexpected perspectives on the relationship between military law and the concept of law for Kafka.
Register here