The exhibition Golden Hands is the outcome of a year of mutual work between David Adika and Hilla Toony Navok at Artport Tel Aviv, resulting in ideas on aesthetics, space, design and kitsch that developed into collaboration, where each side supports the other, disrupts his work and surprises him.
—
A conversation between Vardit Gross, Hilla Toony Navok and David Adika

The exhibition Golden Hands is the outcome of a year of mutual work between David Adika and Hilla Toony Navok at Artport Tel Aviv, resulting in ideas on aesthetics, space, design and kitsch that developed into collaboration, where each side supports the other, disrupts his work and surprises him.

David: In a quick glance, our works don’t seem that related. During our residency at Artport we discovered that we are interested in similar things – we both wander a lot before exhibitions, we are both extremely passionate about architecture, design, art and what lies between them. If I usually explore the areas of kitsch, display windows, Israeli home interiors and what can be found on their shelves, I believe that Toony is more attracted to home decor shops, furniture and the aesthetics of the Israeli home, mainly that of the periphery. Our artistic action is mostly of transformation – working with what is perceived as banal, peripheral and its decoration with feathers.

Toony: From my point of view, dealing with the everyday has to do with the abstract. I try to find traces and leftovers of abstract “high-class” aesthetics in my everyday surroundings.

David: When we realized we wanted to do something together, we searched for a place that interests us both and that will stimulate us; we thought of Japan in general and Tokyo in particular. Tokyo interested us as a city that, on one hand is filled with great chaos, though inside, things go about in perfect order and cleanliness. Precise and minimalistic aesthetics aside visual noise and redundancy. This physical journey you make in Japan – from the temple of electronics to the temple of Zen – is the type of journey we both try to achieve in our work, using the “cheap” as raw material and as a drive towards a rich aesthetic and spiritual experience.

Vardit: You chose the two colors that dominate the exhibition, blue and red, inspired by an Ikebana battle you witnessed as viewers: a battle in which two masters of flower arrangement compete in front of an audience. The audience votes for the arrangements according to the masters’ assigned colors, red or blue. In your exhibition at Artport you have, in fact, left only the outlines – the colors and the act of choice – leaving out the flowers themselves.

David: I believe that for the both of us, watching the battle was a very powerful moment – witnessing the artistic experience of many years (of the two Ikebana masters) condensed into such a short amount of time, five minutes. It reminded us a little of our own artistic practices – photography, sculpture and drawing. They too possess that crucial moment in which you just put everything down and “that’s it”.

Toony: For me, for example, drawing is never a sketch – it is a moment in time that has to be precise, an action I begin, I don’t erase and I don’t go back.

David: In the Ikebana battle, a choice is made by both, the contestants and the viewers. As such, in the exhibition, the space requires you to choose – left or right.

Toony: We thought of the gallery as a space within a space, and of the possibility of an “intermediate space”, a transition space, that mediates between the outdoors and the indoors, that mixes entering and exiting.
David: The temporary walls (of the intermediate spaces) function as a background, as an object and as dividers. We wanted to preserve the Japanese principle where the background and the object are equals.

Vardit: The temporary walls really become part of the exhibition, yet they also conceal the other objects in it.

Toony: For me, one of the most profound experiences in Japan was the aesthetic of screening. Something is placed almost everywhere to tone down the entrance, to block the view, to obstruct the complete image. In a restaurant, for example, there is a curtain made of fabric or paper to hide those who dine inside; in an outdoor food cart, an awning covering the standing costumers. And, of course, in the Buddhist temples, the rocks hide each other so the garden looks different from every angle. I was interested in the attempt to implement this in the space, to postpone the exposure, to prevent the peeking.

David: I actually didn’t think of it as screening, but rather as a call for peeking, an invitation.

Toony: It’s the same thing – the screening neutralizes the peeking but also provokes it.

Vardit: Even though there is an apparent division between the two sides of the gallery, each of you placed one of your artworks in the other’s side, a sort of gift.

Toony: I don’t think of half the gallery as “mine”. I see the space as a whole, which we thought of together.

David: The intervention in each other’s spaces was also important for the fusion as well as maintaining the feeling of uncertainty and surprise.

Toony: Each of us discovered something the other was thinking about from this intervention. Actually, it’s both a gift and a disturbance.

David: Funny, I see it as a gift and you see it as a disturbance.
What is very evident in Toony’s work, as opposed to mine, is that she sees the disruptions. If in my work I look for that which is “stretched” or “tightened”, I think Toony is in search for disruption and unraveling.
In the exhibition I have taken on part of her way of thinking. For example, in the photograph of the event hall there is a visible leg in the frame. At first, my instinct was to cut it out. Eventually I decided to leave it in – to work with the “disruption” and the “unraveling”.

Toony: It’s no coincidence that you call it a gift. I think that there is generosity in your practice, a view that brings out the best of the photographed subject, appropriates and embraces it at the same time. Before, you mentioned that in our works, we both attempt to bring out beauty and complexity from banality or poverty. I believe that many times, your work possesses a different kind of attempt, which in my opinion is even more daring – the attempt to deal with the beauty of something that is already “considered” beautiful. 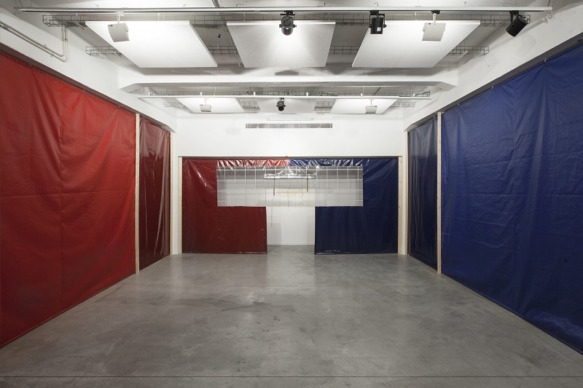