In 1837 following a successful career as a painter, Samuel Morse took the wooden fixture that he used as a canvas stretcher and built the first telegraph device. His fame did not arrive, as he had expected prior to that, from his elegant brushstrokes and his precise giant paintings, but from a whole different set of lines and points. The electromagnetic signs – dots and dashes – were translated into letters and connected to words, enabling for the first time in the history of humankind to communicate remotely. No more drums, bonfires and wind instruments – Morse gave us the ability to deliver long distance messages. We haven’t stopped ever since.

Since the invention of Morse code, there have been many attempts at creating mnemonic devices to easily memorize it. These ideas vary from visual mnemonics, such as drawing each letter of the alphabet with dots and dashes or mapping the elements of the Morse code characters onto pictures, to syllabic mnemonics, based on the principle of associating a word or phrase to each Morse code letter. The Bahr Method is a mnemonic technique that changes the letters of the alphabet into words (Ax Bear Crow) representing dots or dashes. The words are then associated with one another in story form, which uses an associative technique.

The dots and dashes, the most fundamental tools an artist possesses, represent a letter, that represents a word, that becomes a story.

In “Ax Bear Crow” Artport’s residency program artists draw dashes, lines, threads, and points in the constant transition from verbal ideas to abstract ideas and back again. Like a boat deep in the sea calling for help, like the Korean hero of the movie “Parasite” signaling his son, the artists in the exhibition use dots and dashes to mark an idea, then let the idea recreate itself through a whole new set of lines. 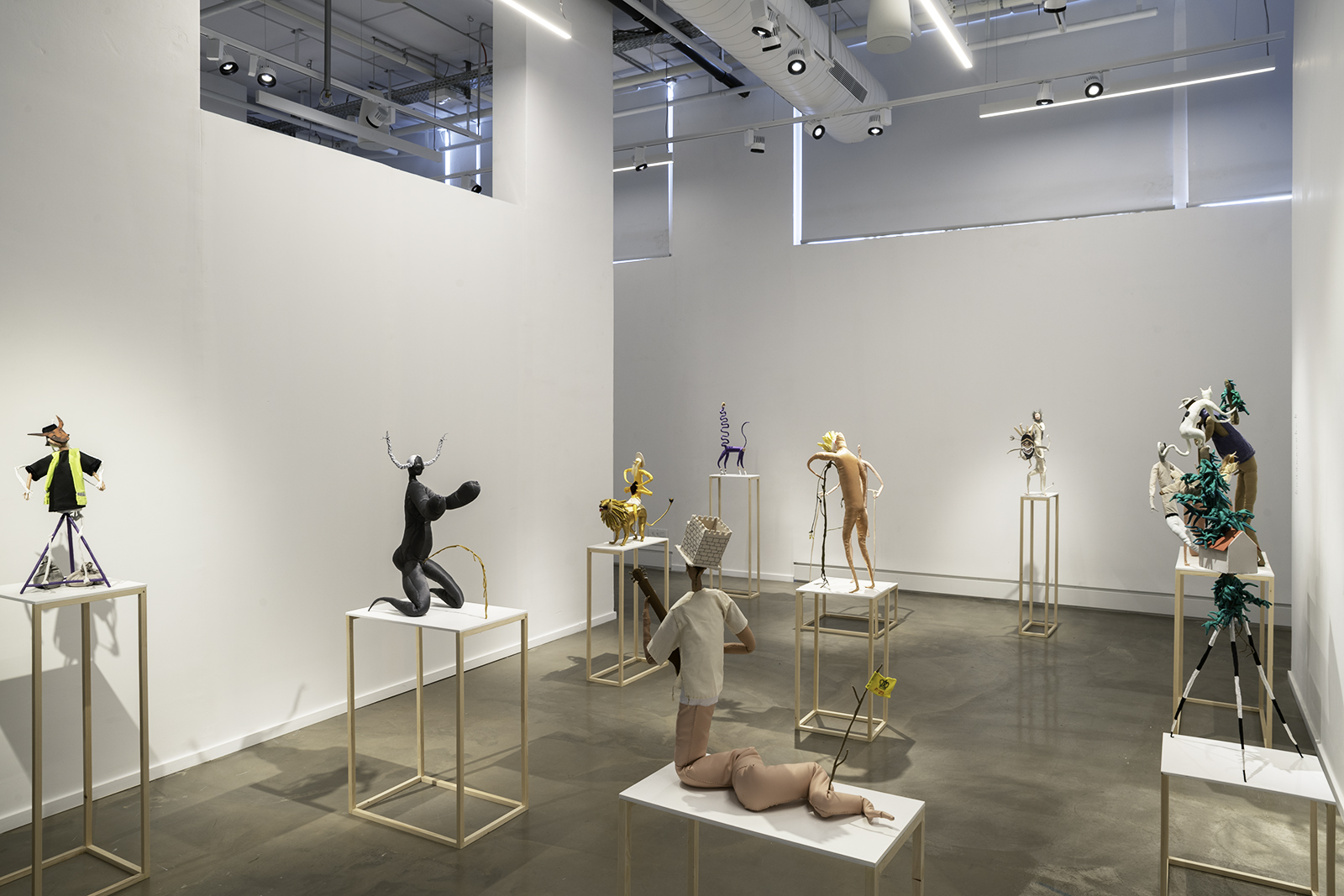 Halil Balabin and Merav Kamel are sewing small, painful scenes of passion and fears. Their puppet- statue like characters range from childish to vulgar, realistic to imaginary. Visible fantasies and repressed thoughts fill the soft fabrics, and though only the sewing thread seems to be visible, the stinging and bleeding presence of endless needles cannot be ignored.

Gil Yefman aims his focus at one infinite dot: The pupil, which in turn looks back at him – revolving, shuttering, blinking. Regarded as the quintessential pathway into the soul, the pupil is a black hole where ships and hopes enter to be devoured whole; it is the place that holds the ever-growing divide between a passive gazing and the engaged action of viewing. 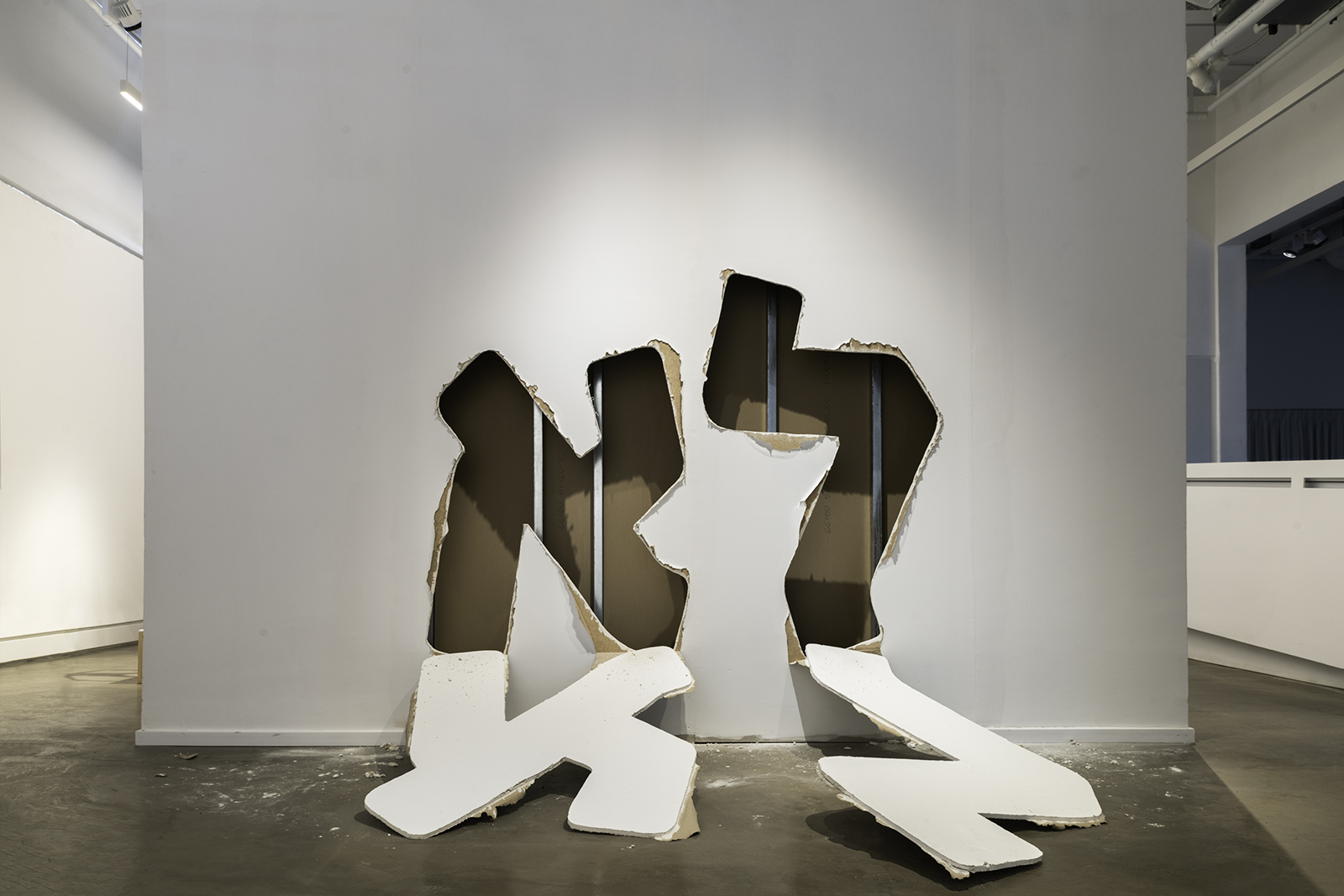 Yael Frank shatters through a plaster wall, like a cartoon character whose contours are left on the wall after smashing into it, marking the presence of someone who is no longer there. Broken into the wall, the word “no” leaves us with its opposite – an absolute void, a black hole. However, does the absence of a “no” necessarily imply a “yes”? 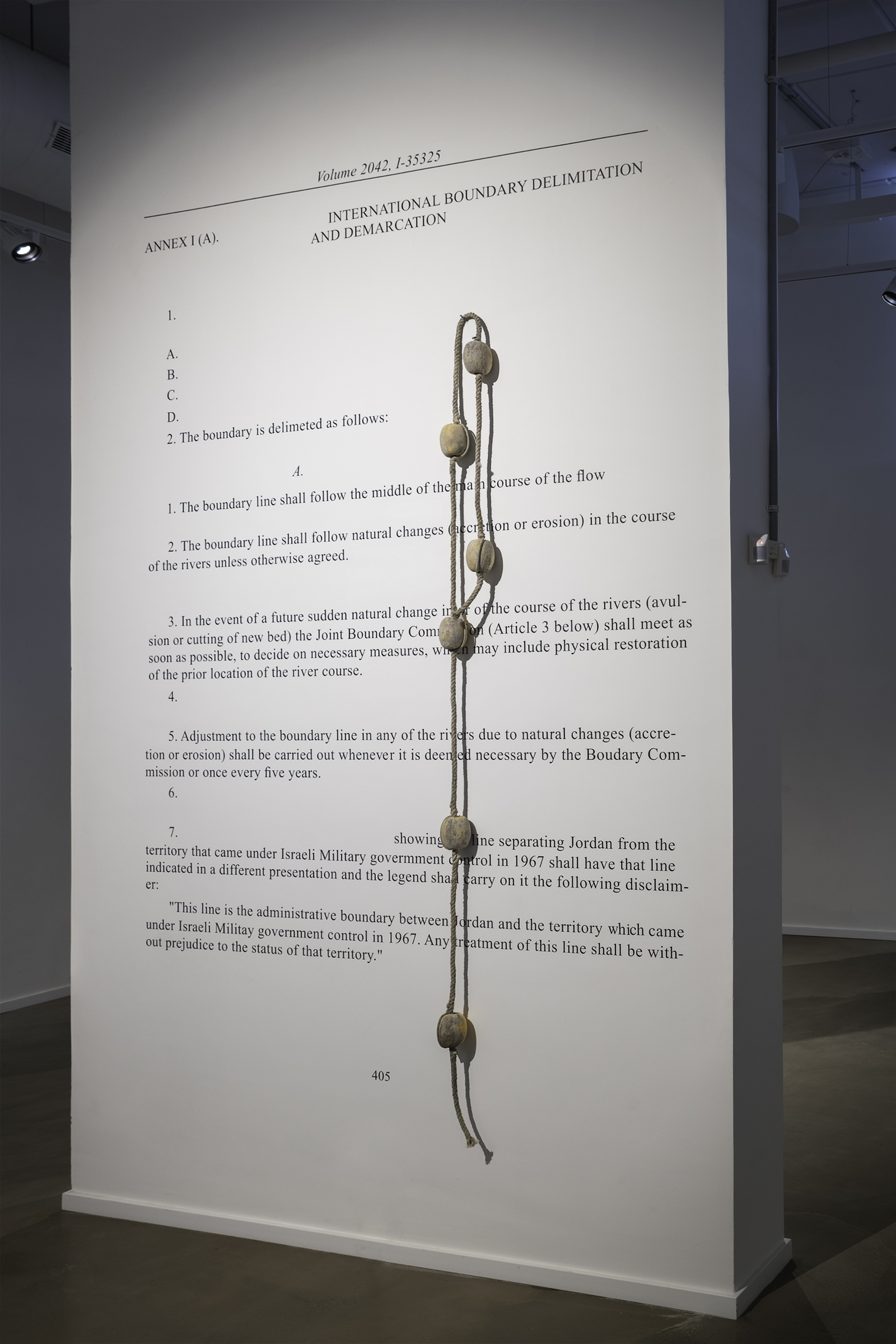 Ella Littwitz shows the line of towed buoys that mark the physical border between Israel and Jordan, where the collision of two tectonic plates frequently alters the course of the Jordan River. As she reads passages from the Israel-Jordan peace treaty, which strives to define a clear-cut line of separation amid the arbitrariness of nature, Littwitz looks into natural and national borders, examining the changes occurring in nature over and against the status quo of territories. 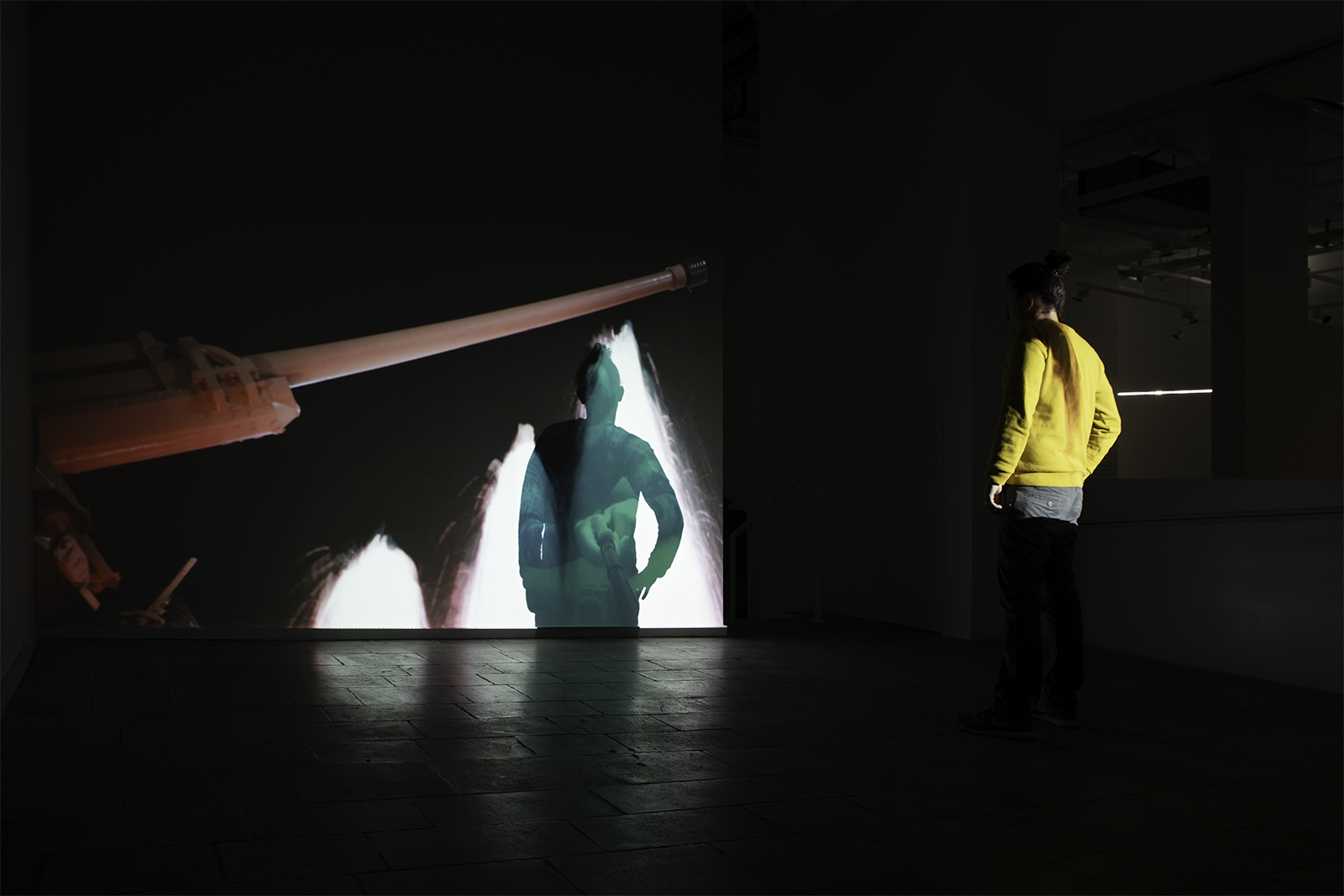 With his video, Dor Zlekha Levy places us on an imaginary thread connecting the two barrels of cannons located wide apart: The first, a Lebanese cannon seized by Israel in wartime, sits atop a fountain at the entrance to the city of Nahariya, its barrel pointed toward Lebanon; the second, sunken in the sea in Lebanese territory to form an artificial reef, is pointed toward Israel. As the two mutually-pointing cannons grow rusty from the two sides of the border, the territory stretched out in-between them comes to represent an unrequited longing for contact, like a kiss blown in the air. 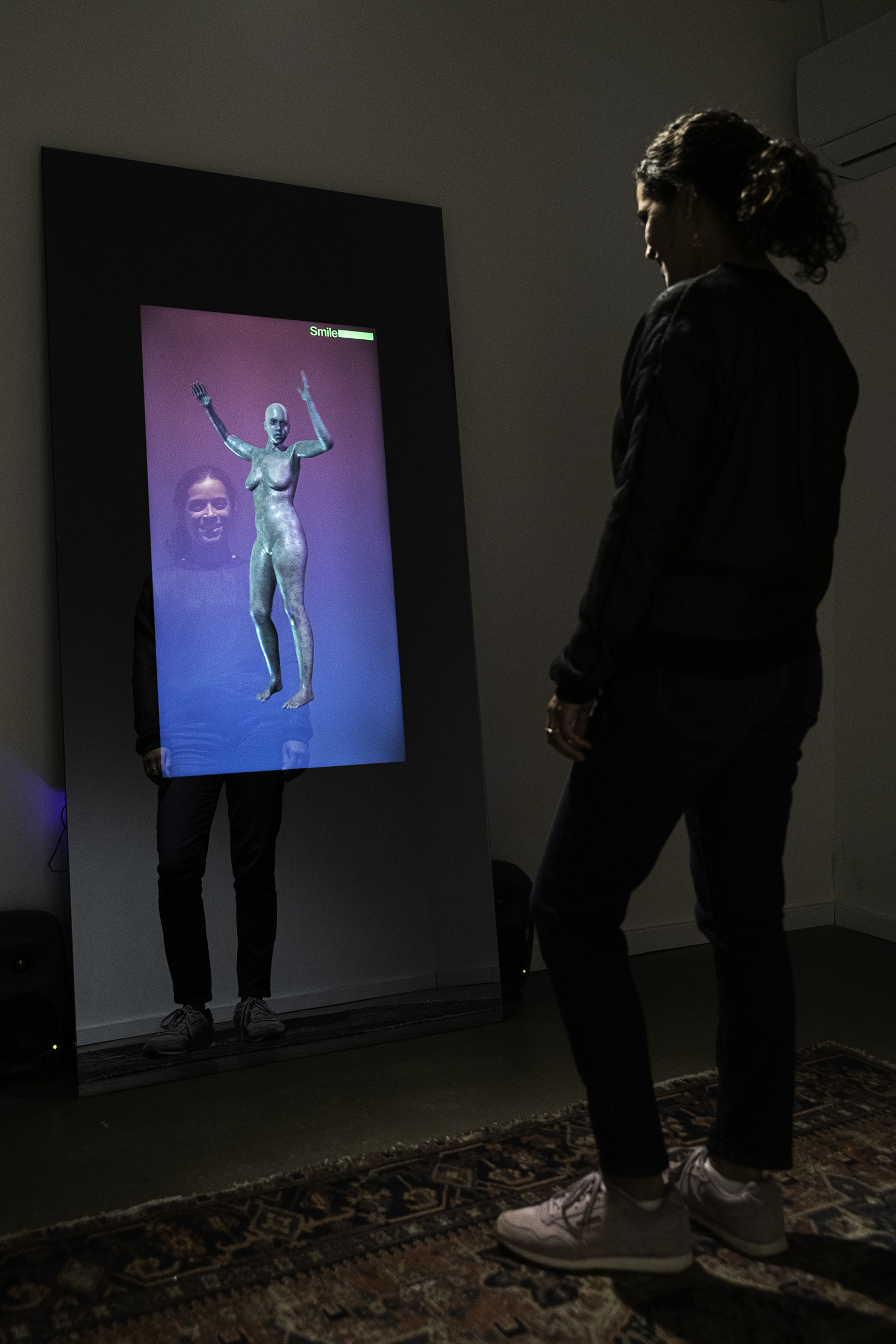 Faking a Smile Is Easier than Explaining Why I'm Sad

Ruth Patir, viewers are invited to enter a private viewing room where a mirror and a digital scan of the artist’s face are wired to an artificial intelligence software. Patir’s likeness serves as a mediating figure between the computer and the viewer, who with their facial expressions are able to monitor the behavior of the character they see on the screen in front of them.