Helene Lundbye Petersen is a Danish curator and writer based in New York City. She holds an MA in Art History (University of Copenhagen) and Communication Studies (Roskilde University).

Between 2008 – 2011 Helene Lundbye Petersen was project manager for Olafur Eliasson and full-time director of his studio in Denmark. As an independent curator, she curated D a n c i n g – a documentary on invented space: So Young Yang at White Box, NYC (2012) and Realism Reversed – a dialogue with Berlin at Christian Dam Galleries, Copenhagen and Oslo (2005). She co-curated Approaching Journey for the City States Liverpool Biennial, Liverpool (2012).

As a writer she has written books such as the exhibition-catalogue Realism Reversed – a dialogue with Berlin(2005); Yvette Brackman: Systems & Scenarios published by JRP|Ringier Kunstverlag AG (2012); and The White Book, published by White Page Project (2012). She has co-edited books such as Olafur Eliasson: Din blinde passager.

Her curatorial project is working for finding, creating and uttering the optimal conditions for art. If the world could be divided into the comprehensible, what we seem to understand, and incomprehensible, what we will never understand, art would be floating in the membrane between the two, never to settle but constantly being open to our interpretations. Therein art holds a great potential in offering us to become aware of how we create meaning and negotiate our way to our individual realities. It is such dialogues and  encounters that are needed for the realization of hopes for change in society at large in a time where globalization and technologies seek to generalize our means of communication.

Her work is based on the philosophy that language is space and space is language. Both will speak unfolded aspects of art, which will never be able to conclude what art is about but only communicate our interpretations of it. 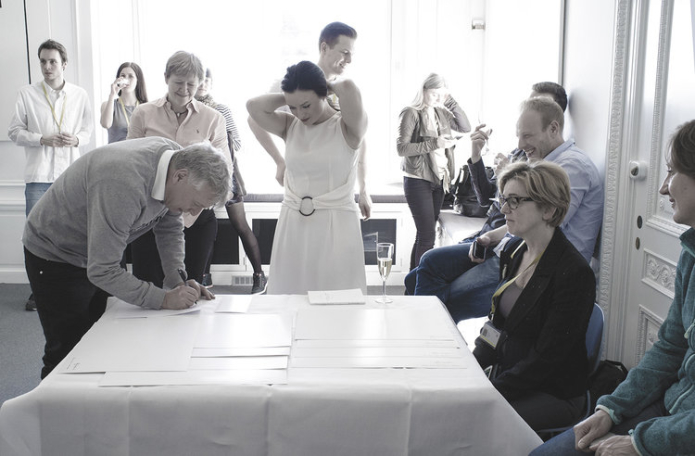 WhitePageProject is the core of Helene Lundbye Petersens work. It is a concept of a free and open space. It can be literally in a piece of paper that we allow to be free and open for new thought; but it can also be in the way we approach ourselves, societies; relations; or conversations. It is a place to help us connect with the Genuine in life. Helene Lundbye Petersen honours it as the name of her publishing house, which prints her books, as well as her studio. At the same time, it also covers a series of works : “Blank White Page” dedicated to individuals and institutions.