Derek Fordjour’s images draw upon a variety of sources, including sporting imagery, board and card games, carnival motifs, and the circus to explore ideas of vulnerability. He uses the economic, political and psychosocial implications of games to discuss the power structure that exists around rewards and sanctions, merit and punishment, for both the player within the game and as an allegory for the broader human experience. Team dynamics that evoke the tension of an individual situated within a collective effort, convey the seductive sense of the risks and rewards that are inherent in the drama of both games and life.

Derek Fordjour was born in Memphis, Tennessee to parents of Ghanaian heritage. His work has been exhibited in numerous venues including Sotheby’s S2 Gallery in New York City, Roberts & Tilton Gallery in Los Angeles, and Galleria Monica DeCardenas in Switzerland. He was awarded 2016 Sugarhill Museum Artist-in-Residence, 2017 C12 Emerging Artist Award and the 2017 Sharpe Walentas Studio Program in New York City. He is a graduate of Morehouse College in Atlanta Georgia, earned a Master’s Degree in Art Education from Harvard University and an MFA in painting at Hunter College.  His work has been reviewed in the New York Times, Los Angeles Times, Hyperallergic and Brooklyn Rail. He has also been featured in several publications such as Forbes Magazine, ESPN’s The Undefeated and VICE Creators. He frequently serves as a Visiting Critic and Lecturer, most recently at Yale University School of Art and The Cooper Union. His work also appears in several collections throughout the US and Europe including JP Morgan Chase collection and Dallas Museum of Art. 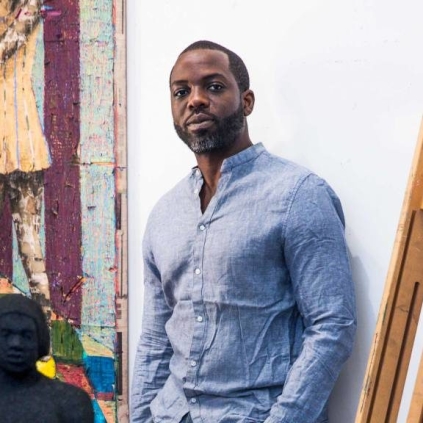 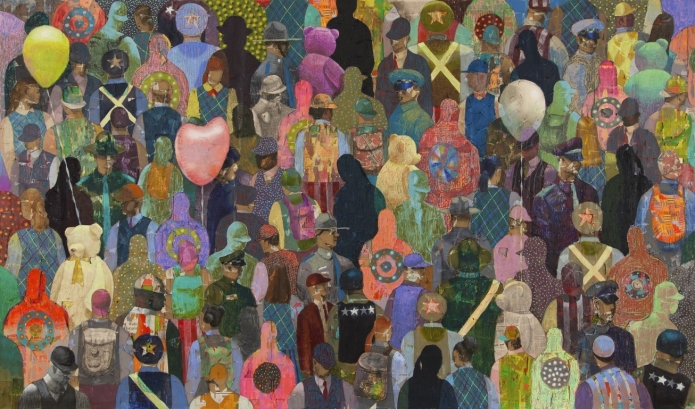 Half Mast, outdoor installation at the Whitney Museum of American Art